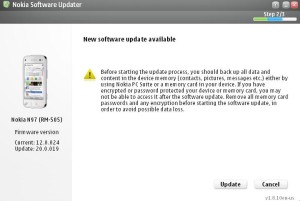 Links:
The N97 does have UDP (User Data Preservation), so while its always a good idea to backup all your data before the firmware update, none of your programs or data should be affected with the update.

Remember you can update using the N97’s OTA (Over-The-Air) feature, or if you prefer you can download Nokia’s Software Updater application to update your N97 on your windows PC. Right now the Update seems to be only available via NSU.

If there’s no new firmware detected for your device yet, it might be because it hasnt reached your region product code yet, or maybe your device is carrier branded. It should roll out to all product codes eventually though.

According to the Nokia Discussion Forums , the software contains many fixes and improvements including:

Have you updated your N97 yet ? Notice anything new with the firmware update that we might have missed ? Do let us know in the comments y’all !